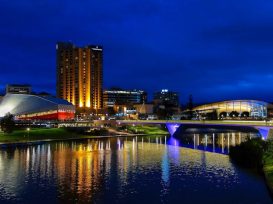 Adelaide is the capital city of South Australia and the fifth largest Australian city in terms of population. Adelaide is a beautiful cosmopolitan coastal city with lots of parks that is home to famous museums which include the Art Gallery of South Australia and the South Australian Museum. The coastal city also hosts the annual Adelaide Festival, an arts festival that also includes several film events. In this article we are taking a look of 5 movies shot in Adelaide. Find out which is the latest movie shot in Adelaide below. Bad Boy Bubby, one of the most famous movies shot in Adelaide was written and directed by Rolf de Heer. This movie filmed in Adelaide follows Bubby (Nicholas Hope), a naive man who was trapped by his mother for nearly thirty years in a small room. The deranged Bubby manages to escape and his adventure to the modern world begins. The movie was shot in several locations across Adelaide including Port Adelaide (College Street, Crozier Street and in the Commercial Road), St Peter’s Cathedral, North Adelaide and many more. Shine is perhaps the most famous movie shot in Adelaide, that follows a young pianist named David Helfgott (played by Geoffrey Rush) who has a mental breakdown due to the pressure from his father and teachers. He then returns years later to a popular acclaim. This movie filmed in Adelaide won Geoffrey Rush his first and only Academy Award for his role as David. Shine was filmed in several locations across Adelaide such as the Adelaide Botanic Gardens, the Parklands and the Town Hall on King William Street. December Boys is another movie filmed in Adelaide starring Daniel Radcliffe (yes, Harry Potter) and Teresa Palmer. The movie follows four orphan boys in the 60s who have grown to be best friends. However, they are now competing for a place in one family. The movie was filmed and also takes place in South Australia and features several shots in Adelaide. December Boys was also filmed in the South Australian Film Corporation studios in Hendon, Adelaide. The Babadook is a brilliant horror movie written and directed by Jennifer Kent. This movie shot in Adelaide follows a widowed mother (Essie Davis) who struggles with her son’s fear of an imaginary monster lurking in their home. However, she soon realises that the threatening presence is also around her. The Babadook received an 98% (Certified Fresh) score on Rotten Tomatoes. Finally, this movie was entirely shot in Adelaide as well as in Glenside, a suburb in the City of Burnside, Adelaide. Girl Asleep is one of the latest movies shot in Adelaide starring the 18 years old Australian actress, Bethany Whitmore. This family comedy follows a teenage girl named Greta as she is about to turn 15 and struggles to leave her childhood behind. Finally, this movie was entirely shot in Adelaide, Australia including the Anomaly Film studios in Hendon.

Enjoyed this article? Why not take a look at the 5 Movies Set In Nicaragua?