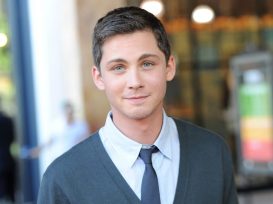 Logan Lerman is a talented actor known for taking challenging roles from a young age. The now 25 year old actor started his career at the age of 8 playing at Rolan Emmerich’s The Patriot. Unlike most child actors, Logan Lerman stayed out of the spotlight when growing up and even now he still avoids publicity. Logan Lerman has a bright feature ahead of him with films like Rothchild and End of Sentence in the works. In this article we are taking a look at the 5 best Logan Lerman movies to date. Find out which is the best Logan Lerman movie below. My One And Only is an adventure/comedy movie starring Renée Zellweger and Logan Lerman. The movie follows a family’s unusual road trip from NY to St. Louis and finally Hollywood. In this unusual film, Anne Devereaux (Zellweger), the mother of the two kids is trying to find a father for her two kids (Logan Lerman and Mark Rendall) after walking in her husband with another woman. Despite its unusual premise, the movie is inspired by the childhood of the actor George Hamilton. Fury is a war movie written and directed by David Ayer, featuring many stars including Brad Pitt, Shia LaBeouf and Jon Bernthal. This war movie takes place in 1945 during World War II and it follows a tank commander (Pitt) and his crew fighting their way across Germany. Logan Lerman plays Norman Ellison, a young soldier who replaces the commander’s (who they call Wardaddy) deceased gunner. This is one of the best Logan Lerman movies since it’s the first time we see him in the role of a soldier. Despite his rookie status, Logan Lerman delivers a powerful performance. 3:10 To Yuma is a remake of the famous 1957 western film of the same name. This 2007 western directed by James Mangold stars Russell Crowe, Christian Bale and Ben Foster, however, despite the award winning cast, Logan Lerman manages to steal some of its thunder. In this film featuring Logan Lerman, a rancher (Bale) who is trying to gain his son’s respect, is escorting a famous outlaw (Crowe) to the 3:10 train that will take him to court in Yuma. Logan Lerman plays the rancher’s impulsive and gunslinging son. This western film definitely improved on the original and managed to get an 89% on Rotten Tomatoes and a rating of 7.7/10 on IMDb. Indignation, one of the best Logan Lerman movies is based on Philip Roth’s novel of the same name. This drama is written and directed by James Schamus and it takes place during the Korean War. Indignation follows Marcus Messner (played by Logan Lerman) a Jewish student from Jersey who is studying at a small and conservative Ohio college. Furthermore, during his time at the college, the idealistic Marcus is struggling sexual repression, anti-Semitism and a rough college administration. This Logan Lerman film received an 81% rating on Rotten Tommatoes. The Perks Of Being A Wallflower is one of the best Logan Lerman movies if not the best. In this drama, Logan Lerman plays an introvert high-school freshman, who all his life has been an outsider, as he struggles with the suicide of his best friend, his first love and his own mental illness. Thanks to his starring role in the film, Logan Lerman managed to show off his talent and the chemistry with his co-stars, Emma Watson and Ezra MIller. FInally, this Logan Lerman movie is based on Stephen Chbosky’s novel of the same name. Needless to say, the film received an 86% score on Rotten Tomatoes and an 8/10 rating on IMDb.

Enjoyed this article? Why not take a look at The Top 5 Spanish Thrillers?