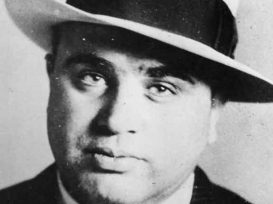 I’m gonna make him an offer he can’t refuse!
Gangster movies have always been the guilty pleasure of most movie lovers. Maybe it is because of the stellar casts or solid directing, movies featuring the mafia have always been known for their Epicurean Hedonism (that’s right, it’s not Cyrenaic). Like the big mafia movie lovers we are, we decided to put together a list of the 10 best gangster movies of all time. Mean Streets is one of Martin Scorsese’s first movies and the first time the award-winning director collaborated with Robert De Niro. The mafia movie follows Charlie (Harvey Keitel), a small-time hood aspiring to climb the mafia ladder with the help of his ill-tempered friend Johnny Boy (De Niro). An interesting fact about this film is that the rights for the songs that were used took approximately half the budget which was only $500,000, hence, Martin Scorsese had to source his own record collection for the score. The Untouchables is a film that follows Federal Agent Eliot Ness (Kevin Costner) and his team, in their efforts to stop Al Capone. In addition, this mafia movie features a great cast, including Robert De Niro as Al Capone (can’t have a mafia movie without De Niro), Sean Connery (won an Oscar for his role as Jim Malone) and Andy Garcia. The Untouchables is based on a true story. A mafia movie list wouldn’t be complete without a film about the Yakuza. This gangster film series directed by Kinji Fukasaku (also directed Battle Royale) is set during post-war Japan and follows Shozo Hirono, a young gangster who is trying to deal with the shifts of power between Yakuza bosses. Finally, Battles Without Honour and Humanity was a box-office success in Japan. Another Scorsese movie that made our list is Casino. This mafia film depicts Las Vegas as a coin. One side of which is glamorous and alluring while the other is violent and cruel. Furthermore, Casino features a great cast with Robert De Niro, Joe Pesci and James Woods as well as a magnificent performance by the breathtaking Sharon Stone. It seems like there can’t be a mafia movie without Robert De Niro. Once Upon a Time in America follows a group of Jewish gangsters in New York, depicting them from early childhood, to their glory days during the Prohibition era as well as 35 years later. This mafia movie was director’s Sergio Leone final film. 6 time Oscar winner, The Godfather: Part II is Francis Ford Coppola’s second masterpiece. Considered by many the ultimate mafia movie, The Godfather: Part II depicts the early life of Vito Corleone (De Niro) in 1920’s New York, as well as his son’s Michael (Al Pacino) as he attempts to expand his business in Las Vegas and Cuba in the 50s. The Departed is considered by many as the best Martin Scorsese movie. This award winning Irish mafia movie is set in Boston and follows an undercover cop in his pursuit to infiltrate the Irish mob in South Boston. The Departed features an A-lister cast which includes Leonardo DiCaprio, Matt Damon, Martin Sheen and of course Jack Nicholson. The film also won 4 Academy Awards and according to the director himself, it is the first movie “he’s ever done with a plot”. Goodfellas was based on the life of Henry Hill (Ray Liotta), a New York City mobster who was part of the Lucchese family. The film follows his life from 1955 up until 1980 and chronicles his rise in the crime family. In addition, for his performance as ill-tempered Tommy DeVito, Joe Pesci won an Academy Award for best supporting actor. Goodfellas is considered by many as the best movie ever made. There’s nothing more that we can say about The Godfather. Coppola’s brilliant directing alongside an award winning performance by Marlon Brando have deemed this mafia movie the best movie of the 20th century. Furthermore, an interesting fact about The Godfather is that Brando wore a specially designed mouthpiece in order to look like a bulldog. Brando also based his voice on real-life mobster Frank Costello.

Enjoyed this article? Why not take a look at The 5 Best Mel Brooks Movies?