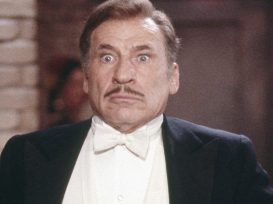 Not much can be said about the legend that is Mel Brooks. The 91 year old actor, director and also producer has been one of the greatest comedic filmmakers of the previous century. His award winning directorial debut on The Producers (1967) is considered by many as the best comedy of the 20th century (I want that money!). Despite a few of his last movies, including Dracula: Dead and Loving It, Mel Brooks deserves praise for his film farces and comedic parodies. Since we are huge Mel Brooks fans, we are putting together a list of the best Mel Brooks movies of all time. Spaceballs is the ultimate Saturday afternoon movie. This Mel Brooks movie is a comedic parody of George Luca’s Star Wars trilogy. Spaceballs was directed, acted and produced by Mel Brooks. His leading character, Lone Starr, mixes elements of both Han Solo and Luke Skywalker into one character. Who else can’t forget the incredible performance by Rick Moranis as Dark Helmet? In this Mel Brooks movie, a film director and his peculiar companion struggle to produce the first major silent film in 40 years. The film only contains one word of dialogue, however, guest appearances by Paul Newman, Liza Minnelli, James Caan and many more make Silent Movie one of the best yet underrated comedies of the 70s. Furthermore, this Mel Brooks film features one of Marty Feldman best career performances in the role of Marty Eggs. “Somebody’s gotta go back and get a shit-load of dimes!”.
This highly quoted Mel Brooks movie released in 1974 was nominated for 3 Academy Awards, including Best Original Score (lyrics by Mel Brooks). The film follows a black sheriff named Bart who was appointed by a corrupt politician in order to ruin a western town. Bart, a sophisticated urbanite will struggle winning the townspeople over, however, he will be the corrupt politician’s main opponent. There’s not much more we can say about The Producers. Mel Brook’s directorial debut is also one of his best films. The Producers follows film producer Max Bialystock, a “Casanova” who romances rich old ladies in order to secure funding for his films. After meeting with an accountant (it’s a noble profession, it contains the word count!) called Leo Bloom, they both realise that they could make a fortune if they produce flops. If only we could get Springtime for Hitler on Broadway.

Enjoyed this article? Why not take a look at The Top 10 Mafia Movies Of All Time?