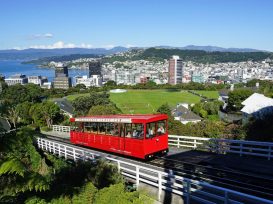 Wellington, also known as “Windy Wellington”, is the capital of New Zealand. Located on the North Island it sits near the most southern point on the Cook Strait. Wellington is a beautiful yet compact city that features a scenic waterfront promenade, beaches and picturesque and colourful houses. The capital’s nickname, Windy Wellington, is justified by the strong winds that blow through the Cook Strait. Despite its small population of approximately 200.000 people, Te Whanganui a Tara (Wellington in Maori) is a vibrant city with many art galleries, fancy restaurants and museums. Furthermore, Wellington is also known for its movie studios in which several blockbusters chose to use for filming. In this list we are taking a look at 7 movies filmed in Wellington, New Zealand. Find out which is the latest film shot in Wellington below. Bad Taste, a cult film among comedy splatter fans, is one of the many movies filmed in Wellington, New Zealand. Written and directed by Peter Jackson (feature film directorial debut), Bad Taste has become a fan favorite in the past years. The New Zealand film tells the story of a small town whose residents are replaced by aliens who want human flesh for their space fast-food chain (yes, it is as hilarious as it sounds). Bad Taste was entirely filmed in Wellington in several places including Peter Jackson’s hometown of Pukerua Bay, Makara Beach, Estuary Street and many more. Finally, an interesting fact about the cult film is that Peter Jackson is also a part of the cast. The Frighteners, another Peter Jackson movie filmed in Wellington, is also a comedy/horror film. This Peter Jackson movie tells the story of a man (played by Michael J. Fox) whose wife was killed in a car accident and can now communicate with ghosts. He then decides to use his psychic powers to con people by staging fake house hauntings. The Frighteners filming locations in Wellington include Miramar and Island Bay. Finally, an interesting fact about the film is that Michael J. Fox performed most of his own stunts without hurting himself, but ironically, he broke his foot by a simple fall when they were filming in a forest. Undoubtedly the most famous movies on our list, the Lord of the Rings Trilogy was entirely filmed in New Zealand. There is definitely no need to explain what the movies are about so we will cut to the chase. LOTR was filmed in several location across New Zealand including Wellington. Some of the Wellington locations of this J.R.R Tolkien and Peter Jackson include the Kaitoke Regional Park (scenes of Rivendell and the river Anduin), Upper Hutt, Hutt Valley (Moria exteriors) and also Fort Dorset in Miramar (the Inn of the Prancing Pony). King Kong, directed by Peter Jackson, is the remake of the famous 1933 movie of the same name and one of the many movies filmed in Wellington. The semi-successful movies is set in 1930s New York and follows an aspiring movie producer who along with his cast and crew set to finish the film they are working on in the distant and mysterious Skull Island. King Kong was entirely filmed in New Zealand (with some post production shots in California) in Auckland and Wellington. Wellington locations include Shelly and Lyall Bays, Hunt Valley and also Miramar Wharf. Finally, King Kong was also filmed in several studios including the Camperdown Studios and various studio warehouses in Miramar. What We Do in the Shadows, one of the many movies filmed in Wellington, is a brilliant film written and directed by Jemaine Clemen and Taika Waititi (Hunt for the Wilderpeople). This comedy/horror film follows a documentary crew who is filming the lives of three flatmates who happen to be vampires. The three vampires are sharing a house in Wellington and as it turns out they have problems (sometimes hilarious) too. The movie was entirely shot in Wellington. In addition, most of the filming took place in Miramar and the house of the three flatmates is located in 36 Para Street.

Pete’s Dragon is a 2016 family movie that was based on the 1977 animated film of the same name. The movies stars Bryce Dallas Howard, Robert Redford and Oakes Fegley as Pete. Pete’s Dragon follows the escapades of a young orphan boy name Pete alongside with his friend, who as suggested by the title is a dragon. The movies was entirely filmed in New Zealand(several locations), including Mount Victoria and Upper Hutt in Wellington. Finally, Pete’s Dragon is a great adventure movie for the whole family that managed to gross $143 million worldwide. Ghost in the Shell is one of the latest movies filmed in Wellington. The film, which was based on the third-person shooter video game of the same name, stars Scarlett Johansson. The movie follows Major (Johansson), a human who is cyber enhanced in order to become the perfect soldier and take down the worst criminals. Ghost in the Shell was filmed in several locations across the world, including Wellington, in the Stone Street and Avalon Studios, as well as in several locations across Victoria Street. Finally, one of the producers of the sci-fi action movie, stated that the reason why they chose to shoot in Wellington was because it provided a futuristic environment in an urban setting.

As most of our readers probably guessed, we didn’t include famous movies that were only filmed in Wellington movie studios, however, we felt that we should dedicate a special-mention section.

The first instalment of the new Planet of the Apes franchise was filmed in the US. However, motion capture took place in Wellington, New Zealand.

The Hobbit trilogy, just like the Lord of the Rings was filmed in several studios in New Zealand. The Wellington studios include the Stone Street studios in Miramar.

This holiday comedy-horror film that tells the story of a young boy who accidentally summons a Christmas demon. Krampus was also filmed in the Stone Street studios in Miramar, Wellington.

Enjoyed this article? Why not take a look at the 5 movies filmed in Seoul, South Korea?