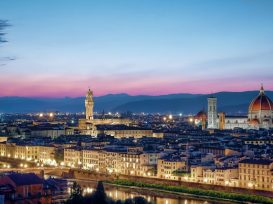 Florence, Firenze in Italian, is a picturesque Italian city located in Tuscany. Considered by many as one of the most beautiful cities in the world, Florence has been the home of several art and architecture masterpieces. Some of the Tuscan’s capital famous sights include the Duomo (engineered by Brunelleschi and Giotto), the Uffizi Gallery (home to some of Botticelli’s and da Vinci’s sensational works) and of course the well-known Ponte Vecchio. We’d be lying if we said that we never thought of moving in Florence, enjoying promenades in the Boboli Gardens in spring or eating a Bistecca alla Fiorentina accompanied by a glass of Tuscan wine in one of the many scenic streets of Florence. Furthermore, Florence’s beauty couldn’t have been left unobserved by many filmmakers who chose the “City of Lilies” as their canvas. In this article we are taking a look at 6 movies filmed in Florence, Italy. Find out which is the latest movie shot in Florence below. A Room with a View, a romantic drama based on E.M. Forster’s novel of the same name, is one of the most famous movies filmed in Florence. The 3 times Oscar winner film features an a-lister cast which includes Maggie Smith, Helena Bonham Carter, Judie Dench, Daniel Day-Lewis and Julian Sands. The movie is set during the Edwardian era and it follows a young British lady who is torn between marrying the safe Cecil, or the unpredictable George who she met when she was in Tuscany. Filming took place in several locations across Florence including Piazza Santa Croce, Ponte Vecchio and in Fiesole. Finally, A Room with a View has a 100% score on Rotten Tomatoes with an average rating of 8.4/10 out of 29 fresh reviews and 0 rotten. Much Ado About Nothing is a film based on William Shakespeare’s play of the same name that was adopted for the screen and directed by Kenneth Branagh. The film was entirely shot in Florence, in Villa Vignamaggio located in Greve in Chianti. In addition, Much Ado About Nothing stars Kenneth Branagh, Emma Thompson and Keanu Reeves and also features a young Kate Beckinsale. The film, which is one of the most famous movies filmed in Florence, was nominated for a Golden Globe for Best Motion Picture, Comedy or Musical. Hannibal is the follow-up to the 5 times Academy Award winner “The Silence of The Lambs”, starring Anthony Hopkins as Hannibal Lecter. Alongside him this time is Julianne Moore in the role of Clarice Starling (Jodie Foster declined to appear in the sequel), Gary Oldman and Ray Liotta. The movie follows Hannibal Lecter who is now living in Florence and is working as a curator in a museum, who is trying to reconnect with Clarice Sterling. The movie was filmed in several locations across Florence, including the Palazzo Vecchio, the Palazzo Capponi and Ponte Vecchio. In addition, an interesting trivia about this mystery thriller directed by Ridley Scott is that people who visit Florence can buy a map that shows the exact locations of where Hannibal Lecter has been.

The Life Aquatic with Steve Zissou, one of the most underrated Wes Anderson movies, was partially shot in Florence. This Wes Anderson film follows Steve Zissou (Bill Murray), an oceanographer, who puts together a peculiar crew in order to hunt down a possibly nonexistent shark he cals the “Jaguar Shark” that allegedly killed his partner. The Life Aquatic with Steve Zissou, a film which Wes Anderson says he drew inspiration from a restaurant menu in Florence to make, was also partially filmed in the Tuscan capital. Finally, alongside Bill Murray also stars Owen Wilson, Cate Blanchett and Anjelica Huston. The Best Offer, one of the many movies filmed in Florence, was written and directed by Giuseppe Tornatore. The movie follows Virgil Oldman (played by Geoffrey Rush), a brilliant yet eccentric art-expert who is hired by a young heiress (played by Sylvia Hoeks) to auction her collection of art and antiquities. This intriguing movie was filmed in several Italian cities including Venice, Milan ad of course Florence. Finally, The Best Offer features several famous works of art from Guido Reni, Titian and many more. Inferno, is one of the latest movies filmed in Florence and also one of the biggest productions to be shot in the Tuscan city. This action movie is the third big-screen adaptation of the Dan Brown novels that follow the adventures of professor Langdon (played by Tom Hanks). Although Inferno was the lowest grossing film of the series and not the best one, it features some of the best cinematography partly because it was filmed in Florence. Some of the shooting locations include the the Piazza della Signoria, Ponte Vecchio, the Boboli Gardens and also Via Proconsolo. Finally, an interesting fact about the movie is that it is the fifth time that Tom Hanks and director Ron Howard work together. For those that don’t know, The Dark Knight Rises shot one of its scenes in Florence. We don’t want to spoil the scene in case someone hasn’t watched the movie (although very unlikely!) but as it can be seen in the photo it features Michael Caine. The scene was shot in La Loggia Bar and Restaurant in Piazzale Michelangelo.

Enjoyed this article?Why not take a look at the 5 movies filmed in Athens, Greece?