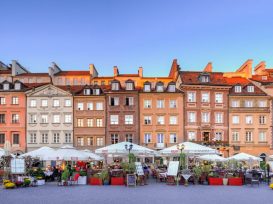 Warsaw, a historic city, is the capital of Poland. Due to the Polish capital’s turbulent history, the city’s architecture is a mix of Gothic-style churches, neoclassical palaces, modern buildings and Soviet-era buildings. Once known as “Paris of the East”, the beautiful city of Warsaw significantly changed after the second World War. Despite the massacre and deportation of the Jewish population and the destruction of the majority of the city as well as the Warsaw Ghetto, Warsaw managed to rise from the ashes and establish itself as a global city. Today, Warsaw is an international hub, with millions of tourists visiting every year and is also one of the biggest economic centers in Europe. Despite its allure, Warsaw hasn’t been used may times as a film canvas. That is why in this list we are taking a look at 5 movies filmed in Warsaw, Poland. Special thanks go to Edinburgh’s very own Ioannis for recommending Warsaw. Find out which is the latest film shot in Warsaw below.

The Night of the Generals is one of the first movies filmed in Warsaw, Poland. This crime drama was directed by Anatole Litvak and stars Peter O’Toole, Omar Sharif and Tom Courtenay. The film is set in 1942 and centers around three generals who allegedly murdered a Polish prostitute. Despite the crimes committed during World War II, a German intelligence officer is tasked to investigate the the generals and seek justice. The Night of the Generals was shot in various places in the Polish capital such as the Old Town, the New Town and the borough of Srodmiescie. The Pianist, one of the few movies filmed in Warsaw, is the most famous movie on our list. The film was directed by Roman Polanski and stars Adrien Brody, Thomas Kretschmann and Frank Finlay. The Pianist as the title suggests follows a Polish Jewish pianist who is struggling to survive during the destruction of the Warsaw Ghetto in the Second World War. This brilliant movie was filmed in several locations across Warsaw , including Nowy Świat Street, Krakowskie Przedmieście Street and Kozia. The Pianist is undoubtedly on of the best films ever made. In addition, it won 3 Academy Awards including Best Director and Best Actor in a Leading Role (Brody). Inland Empire, written and directed by David Lynch(Mullholland Drive), is a 3-hour mystery thriller that stars Lara Den, Jeremy Irons and Justin Theroux. The movie follows an actress who while preparing for the biggest role in her career finds herself falling in love with her co-star. In addition, she comes to the realisation that her life is mimicking the life of her fictional character. Inland Empire is was filmed mostly in the US, however, it was also filmed in Warsaw. Despite its length, Inland Empire is a great film that is in the same style the highly praised Mullholand Drive. In Darkness, one of the few movies filmed in Warsaw, is a 2011 war film that was directed by Agnieszka Holland. This fantastic film tells the real story of Leopold Socha, a man who risked his life to save Jewish refugees in the city of Lvov. The film was shot in both Germany (Berlin) and many cities in Poland, including Warsaw. Finally, an interesting fact about In Darkness is that it was nominated for an Academy Award for Best Foreign Language Film of the Year in 2012. The Lure, one of the most recent movies filmed in Warsaw, is another film directed by the Polish director Agnieszka Smoczynska. This comedy-horror film follows a pair of sirens (mermaids) who after being discovered by a family, are recruited from a cabaret. While one of them is seeking true love, the other one is hoping to feast on the population of Warsaw. The Lure was filmed in several parts of the city and is a Polish production. The new Jessica Chastain and Johan Heldenbergh movie tells the true story of Antonia and Jan, the owners of the Warsaw zoo who saved hundreds of human and animal lives during the German invasion of Poland in WWII. Although the movie is set in Warsaw, the film was shot in Prague, Czech Republic, where the production team recreated the centre of Warsaw.

Steven Seagal has been in Warsaw too. In this terrible action movie, a freelancer is transporting a package for an unknown employer. This box office fail was mostly filmed in Warsaw in locations such as the Royal Lazienki Park, the Old Town and Plac Pilsudskiego.

Enjoyed this article? Why not take a look at our list of 7 movies filmed in Wellington, New Zealand?