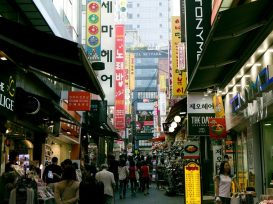 Seoul, a large metropolitan city with a population of approximately 10 million people, is the capital of South Korea. Seoul is one of the most vibrant cities not only in Asia but all over the world. The South Korean capital combines the best of both worlds, with a mix of large skyscrapers, a state of the art subway system and Buddhist temples, palaces and crowded street markets. The Hongdae and the Dongdaeum markets, the Changdeok Palace and Itaewon (if there say hi to Wayne in the Wolfhound) are only some of the places someone has to visit when in Seoul. Furthermore, in the past years Seoul has emerged as one of the top filming locations worldwide with several big productions using the South Korean capital as their canvas. In this article, we are taking a look at 5 movies filmed in Seoul. Find out which are some of the latest movies shot in Seoul below. The second Avengers movie and the 11th addition to the Marvel Cinematic Universe (MCU) is one of the many movies filmed in Seoul. Age of Ultron, written and directed by Joss Whedon follows the Avengers who are trying to take down Tony Stark’s and Bruce Banner’s creation, an originally peacekeeping program named Ultron who has gone rogue. This superhero movie was filmed in many places all over the world including Seoul, in neighbourhoods such as Gangnam and along the Han River. Finally, Age of Ultron grossed a little bit over $1.4 billion worldwide out of which $78 million came from South Korea. Compared to the $50 million the first Avengers movie grossed in South Korea, it’s safe to say that filming in Seoul was a good thing for the producers. Star Trek: Beyond, one of the many movies shot in Seoul, is the third instalment of the rebooted Star Trek franchise. The movie follows the U.S.S. Enterprise and his crew who are stranded on a remote planet fighting for their survival against an unstoppable enemy. Star Trek: Beyond was shot in several locations across the world including the South Korean capital. The news that the movie would be partially filming in Seoul were first made public by the Seoul mayor, Won-soon Park. However, the movie grossed $9 million in South Korea almost $2.5 million less than the previous instalment, Star Trek: Into Darkness.

Colossal is a 2016 action comedy written and directed by the talented Nacho Vigalondo. The movie stars Anne Hathaway and Jason Sudeikis and follows a party-girl named Gloria (Hathaway) who unwillingly leaves New York and moves back in her hometown. A few days in, reports that a giant monster is terrorising Seoul surface and Gloria discovers that she is somehow connected to the monster. Furthermore, most of the Seoul scenes were filmed in Hangang and Yeouido parks. Although Colossal had a strong opening weekend in the US it grossed nearly $4 million domestically. However, it is definitely worth a watch.

Okja, is one of the newest movies filmed in Seoul and was written and directed by Daegu-born Joon-ho Bong (featured in our directors to watch in 2018 list). The movie tells the story of a young girl named Mija, who will anything in her power to stop a large corporation from kidnapping Okja, a fascinating animal and her best friend. Several scenes of the film were shot in Seoul including locations such as the Han River Gangbyeon Expressway, the Hoehyeon underground shopping center the Han Riverside park and the subway. FInally, an interesting fact about this movie is that many theaters in South Korea refused to show it unless Netflix released the movie on its platform with at least a 3-weeks holdback. However, despite the boycott, Okja became one of the most viewed movies in South Korea with 23,000 viewers on its opening day.

The Host is a South Korean thriller written and directed by Bong Joon-ho that was entirely shot in Seoul. In this film, a monster surfaces from the Han River and starts attacking people. Some of the Han River locations include the Wonhyo Bridge and the Dong-ho Bridge.

Train to Busan is a must-see South Korean zombie movie. Although most of the action is taking place in the KTX (fast train) the opening scenes were filmed in Seoul so we felt that we should include it in our special mentions.

Enjoyed this article? Why not take a look at the 5 movies shot in Busan?