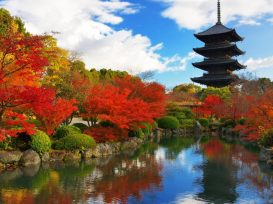 Kyoto, once the imperial capital of Japan for over a 1000 years, is a Japanese metropolitan city with a population of over 1.5 million people. Kyoto, also known as The Ancient City, or the City of History, is home to several Buddhist temples, gardens, palaces, shrines and of course Japanese-traditional wooden houses. Furthermore, Kyoto is a beautiful yet underestimated city that still respects the traditions were people can still see Geishas, which can be found in the Gion district. In this article, we are looking at 5 movies shot in Kyoto. Find out which is the latest movie filmed in Kyoto below. The Pillow Book, directed by Peter Greenaway and starring Vivian Wu, Ewan McGregor and Yoshi Oida, is a movie shot in Kyoto. This drama follows Nagiko (Wu) a woman who has a body-writting fetish and is on the search to find a man who will be her lover and calligrapher. The movie was filmed in several locations in Kyoto including Fushimi Inari Taisha shrine. The Happiness Of The Katakuris, a movie partially filmed in Kyoto, is a unique Japanese comedy-horror movie that tells the story of a family who relocates to the countryside to operatic a rural mountain-inn. However, to their surprise something bad starts happening to their customers. The movie was mostly filmed in Kameoka in Kyoto as well as the Shochiku movie studios, also located in Kyoto.

The Last Samurai is one of the many movies shot in Kyoto, directed by Edward Zwick and starring Tom Cruise, Ken Watanabe and Billy Connolly. Tom Cruise stars as Nathan Algren, a cynical former captain during the American Civil War, who would now work for anyone. Algren is hired as a military advisor to train the first draft of the Japanese Imperial Army whose first priority is to repress or eliminate traditional Samurai warriors. The Last Samurai is a fantastic film and it was nominated for 4 Academy Awards. Although the movie is almost entirely set in Japan the majority of the film was shot in New Zealand. However, the movie was also filmed in Kyoto in the Nijo Castle in Kyoto-shi. In addition, the Imperial Palace seen in the movie is actually the Chion-In Temple in Kyoto as well. Lost In Translation, another one of the movies shot in Kyoto (partially), tells the story of love and friendship that was developed under unlikely circumstances. Sofia Coppola’s masterpiece follows a faded movie star (Bill Murray) named Bob Harris and Charlotte (Scarlett Johansson), a recent Philosophy graduate who is not sure what she’s is doing with her life. The two form an unlikely and complicated friendship.

Lost In Translation is one of the best films ever made (The Irishman’s favorite one) which is partially thanks to its bittersweet vibe. Although most of the movie is shot in Tokyo, there are scenes filmed in the Heian Shrine and also the Nanzenji temple in Kyoto. Furthermore, the must-watch Lost In Translation features an amazing soundtrack from start to finish. Finally, an interesting fact about this movie shot in Kyoto is that Sofia Copolla, the director, wasn’t sure that Bill Murray would actually show up for shooting and only calmed down when Murray was there on the first day of filming.

Memories Of A Geisha, one of the many movies shot in Kyoto, is based on the historical novel by Arthur Golden called the Memoirs of a Geisha. The movie tells the story of a 9-year old girl named Chiyo who is sold to a Geisha house. There after years of servitude, it will be determined whether or not she will become a Geisha. Memories Of A Geisha won 3 Academy Awards, with one of them being for Best Achievement in Cinematography. The movie was shot in several places across Kyoto, including the Fushimiinari Shrine, the Arashiyama Bamboo Grove, the Yoshimine Temple and also the Heianjingu Shrine.

Tora! Tora! Tora! is a fantastic war movie that tells the story of a series of mistakes that were made by the United States Navy shortly before the attack on Pearl Harbor. Although the movie was shot in several locations in Japan, in Kyoto it was only filmed in the Toei-Kyoto Studios.

Enjoyed this article? Why not take a look at The 5 Movies Shot In Catalonia?