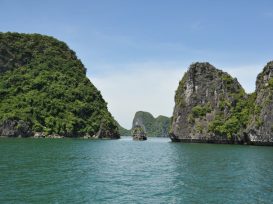 Ha Long bay, a UNESCO World Heritage Site, is located in northeast Vietnam and is one of the most beautiful places in the world. Ha Long bay, commonly referred to as Halong Bay, features emerald waters and hundreds of small islands that are topped by breathtaking rainforests. The bay is a miracle of nature and undoubtedly a must-visit destination for all ages. Although Ha Long Bay could have been used in many films, the government makes it difficult for filmmakers to use the bay as their canvas, thus, they choose similar locations to shoot such as Thailand’s PhangNga Bay. In this article we are taking a look at 5 movies shot in Ha Long Bay, Vietnam. Find out which is the latest movie filmed in Ha Long Bay below. The first foreign movie shot in Halong Bay and perhaps the film that put Ha Long Bay on the filmmaker’s map is Indochine. The Academy Award winner for best foreign film (France) tells the story of a widowed woman in 1930, during the end of the French Colonialism, who is working in the rubber fields and at the same time raises a Vietnamese princess as her own. However, they both fall in love with the same French Navy officer. Indochine was filmed in several places in Vietnam including Ha Long bay. Indochine is a must-see film before visiting Ha Long Bay and is one of the best movies shot in Ha Long Bay. The Vertical Ray Of The Sun is one of the few Vietnamese movies shot in Ha Long Bay that was released in 2000. It was partially filmed between Hanoi and Halong Bay and is a joint French Vietnamese production. The film follows three sisters, were two of them are married and one of them is living with her brother, who she is secretly in love with. Finally, This slow-paced film, features several scenes in Ha Long Bay. Pan, one of the latest movies shot in Ha Long Bay, tells the origin story of Peter Pan. The movies stars Hugh Jackman as Blackbeard as well as Levi Miller as Pan and also features Rooney Mara, Amanda Seyfried and Cara Delevingne. Although the movie was mostly filmed in studios in the UK, several untouched shots of Halong Bay are featured in the film. Finally, despite some spectacular visuals, partially thanks to Ha Long Bay, the movie tanked in the box office, bringing in $128 million on a $150 million budget. Life, one of the few movies shot in Ha long Bay (partially), is a sci-fi horror movie that was directed by Daniel Espinosa. The movie stars Jake Gyllenhaal, Rebecca Ferguson, Hiroyuki Sanada and Ryan Reynolds (first on-screen collaboration of real-life buddies Gyllenhaal and Reynolds) and it follows a team of scientists in space who discover a strange life form. We don’t want to spoil the movie so we will only say that it features a few scenes in Ha Long Bay. Kong: Skull Island, the recent reboot of King Kong, and the first movie of Universal’s Dark Universe, is also one of the few movies shot in Ha Long Bay, Vietnam. The movie follows a team of scientists in 70s, during the Vietnam War, who are sent to explore an island in the Pacific only to find that is home to giant animals and monsters. Kong: Skull Island features several shots in Ha Long Bay in what are some stunning scenes.

Row is an independent short film written and directed by the up-and-coming Johnny Coffeen. The short film follows a couple sitting on a beach, wondering what each one of them would do if the other person died. Row was partially filmed in Ha Long Bay.

Tomorrow Never Dies, a James Bond movie starring Pierce Brosnan as Bond, was originally set to shoot in Ha Long Bay. However, the authorities forbid the movie of filming in Vietnam, thus, production was moved to Thailand. Rumor has it however that the movie did actually shoot in Halong Bay. We will never know.

Enjoyed this article? Why not take a look at The 5 Movies Shot In Kyoto, Japan?