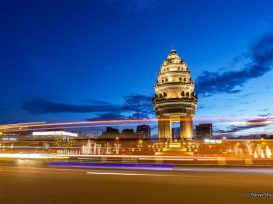 Phnom Penh, once known as the “Pearl of Asia” is the capital of Cambodia. Cambodia is a beautiful country that suffered a great deal when the Khmer Rouge and their leader Pol Pot massacred over two million Cambodians. This tragic page in Cambodia’s history took a toll on the country which is still trying to recover. Nonetheless, Cambodia is a breathtaking country with vast wilderness and secluded beaches. In this article however, we are listing 5 movies set in Phnom Penh. Find which is the latest movie set in Phnom Penh below. The Killing Fields, directed by Roland Joffé, is the most famous film about Cambodia. This movie set in Phnom Penh, follows Sydney Schanberg (played by Sam Waterston), a New York Times journalist who is covering the civil war in the Pearl of Asia. Sydney Schanberg is trapped in Cambodia during the Khmer Rouge cleansing campaign. The film was nominated for 7 academy awards and managed to win 3. The Killing Fields is the quintessential movie to see about the Khmer Rouge regime and Cambodia. City of Ghosts is a crime thriller, directed by Matt Dillon (his first and last silver screen film), starring himself, James Caan and Gerard Depardieu. The movie follows Jimmy, a con man on-the-run, who flees to Cambodia in order to collect his money from an insurance scam. Long story short, things go sour and Jimmy finds himself in a hostile environment. Although the movie tanked in the box office, it features magnificent shots of Phnom Penh from 15 years ago. An interesting fact about this movie set in Phnom Penh is that it features several expats who at the time lived in Phnom Penh. One is Ian ‘Snowy’ Woodford, the legendary among Phnom Penh expats owner of Maxine’s, who unfortunately passed away in 2014. Same Same But Different is the true story of a backpacker and a Phnom Penh bar girl who against all odds, managed to find love. This German movie set in Phnom Penh features David Kross an actor famous for Race (2016), The Reader (2008) and War Horse (2009). The film offers some great shots of modern day Phnom Penh. The Missing Picture is a 2013 documentary written and directed by Rithy Panh that uses clay figures as well as actual footage to recreate the monstrosities committed by the Khmer Rouge between 1975 and 1979. This documentary features images from the actual Tuol Sleng Genocide Museum, also known as S-21 prison. Award wining Diamond Island is a film written and directed by Davy Chou. The film follows a teenager who escapes rural Cambodia in order to become a construction worker in the famous Koh Pich (also known as Diamond Island) island in Phnom Penh. Diamond Island won the SACD Prize in the 2016 Cannes Festival. Davy Chou was also nominated for the Critics Week Grand Prize.

Enjoyed this article? Why not take a look at the 5 Movies Set In Kuala Lumpur?