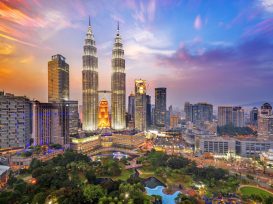 Kuala Lumpur, commonly referred to as KL, is the capital of Malaysia mostly known for the Petronas Towers, two identical skyscrapers that are 451m tall. Although Malaysia is quite a tourist attraction, not many movies have been filmed there. However, several filmmakers have decided to use Kuala Lumpur as their film canvas. This is our list of 5 movies set in Kuala Lumpur. In this third instalment of the Police Story franchise, detective Chan Ka Kui (Jackie Chan) from Hong Kong teams up with a female Chinese detective to break up a drug smuggling ring. This movie set in Kuala Lumpur features a breathtaking scene in which Jackie Chan hangs from a helicopter rope ladder while while flying across KL. Entrapment is an action movie starring Sean Connery and Catherine Zeta-Jones that was partially filmed in Kuala Lumpur. The movie follows Virginia Baker (Zeta-Jones), an insurance agent that is sent by her agency to capture a master art-thief. This movie set in Kuala Lumpur features a scene where the couple hangs from the bridge that connects the Petronas Towers after committing a heist. Although Entrapment was an overall good movie, it was nominated for a Razzie award for worst screen couple as well as a Razzie Award for worst actress. Don is a Bollywood action film that was released in 2006, directed by Farhan Akhtar. This movie set in Kuala Lumpur features a simple man from Mumbai who is recruited by the authorities to pose as Don, a leader of an international smugglers gang. Parts of this Bollywood movie were shot at the Petronas Towers as well as the Jalan Masjid area, the Little India of KL. Fair Game is a spy drama starring Naomi Watts and Sean Penn, that was based on Valerie Plame’s and also on Joseph C. Wilson’s memoirs. Valerie Plame is a former CIA operations officer whereas Joseph Wilson is a former US diplomat. According to Valerie Plame her identity was leaked by the US government following her husband’s critique of the Bush administration. In addition, this spy thriller features several scenes that were shot in Kuala Lumpur.

Blackhat is an action thriller, released in 2015, starring Chris Hemsworth and Viola Davis. This movie shot in Kuala Lumpur (including other locations) follows Nick hathaway (Hemsworth) an ex-convict and talented hacker and his partners on their hunt to bring down a high-level cybercrime network. The movie shot in various locations including KL, Indonesia, Hong Kong and the US.