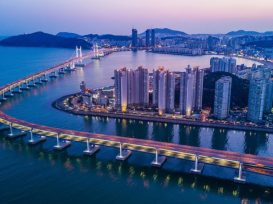 Busan is the second largest city in South Korea with almost 4 million people. This beautiful port city is known for its beaches, including Haeundae and Gwangali beach, as well as its temples and mountains. Despite its beauty, unlike Seoul, Busan is not as famous when it comes to the silver screen . However, many filmmakers decided to use Busan in their films. In this list, we are exploring 5 movies shot in Busan, South Korea. Oldboy, a film made by the famous South Korean director Chan-wook Park, is one of the greatest action movies of all time. This movie shot in Busan follows Oh Dae-Su, a man who was kidnapped and imprisoned for 15 years. Dae-Su is then mysteriously released and he has only five days to find his captor. Oldboy is a brilliant film, unlike Spike Lee’s failed 2013 remake of the same title. Tidal Wave, a movie shot in Busan, is one of the few natural disaster South Korean movies. The movie, as the title suggests is a movie about a Tsunami wave that hits the city of Busan. The movie offers some great shots of Haeundae beach, especially the part after the main beach which still looks like Busan from 20 years ago. One of the best shots of the film however, is the moment the wave reaches Diamond Bridge in Gwangali beach. Both expats and locals living in Busan that often see Diamond (Gwangali) bridge can realise the magnitude of the Tsunami wave. The Thieves, is a South Korean action-comedy film about a group of thieves who go to Macau for a score. This South Korean film features several shots in Busan. An interesting fact about The Thieves is that one of the lead actresses, Hye-su Kim was also born in Busan, South Korea. New World is a crime movie shot in Busan directed by Hoon-jung Park. The movie features the conflict between the authorities and the mafia as seen through the eyes of an undercover cop. Jung-jae Lee stars as Lee Ja-sung, the undercover cop who participates in the secret project “New World” that aims in bringing down the criminal organization “Goldmoon”. The Black Panther is an upcoming Marvel film that will also be part of the Marvel Cinematic Universe (MCU) starring Chadwick Boseman as the Black Panther as well as Andy Serkis, Martin Freeman and Forest Whitaker. This Marvel movie was partially shot in Gwangali beach, Busan. Many people revealed that there will be a car chasing scene on the main beach road. In addition, an interesting fact about the Black Panther revealed by the owner of Beached Bar, a popular bar within expats, is that the producers paid business owners to keep their lights on for as long as the filming would go on.

This article was featured in Haps Magazine Korea.