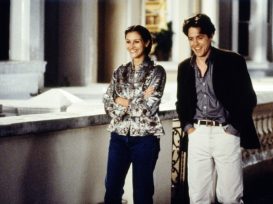 When someone thinks of romance they think of a candlelit dinner in a little cozy bistro, passionate tango dancing or a walk along the Sane. Usually when someone thinks of romantic people, they think of the Italians, the French, the Spanish or even the Brazilians. Well, no one thinks of the British anyways. To everyone’s surprise however, some of the best romantic comedies ever made were in fact a product of the UK. In this list we are taking a look at the best British romantic comedies of all time. Find out which is the best British romcom below. Bridget Jones’s Diary is undoubtedly one of the best British romantic comedies of all time. This romcom was based on Helen Fielding’s novel of the same name that was published in 1996. The movie stars  Renée Zellweger, Colin Firth and Hugh Grant and it follows an average woman named Bridget Jones (played by Zellweger) who is struggling with her many imperfections. Bridget as her New Year resolution decides to find love while at the same time keeps a diary. Bridget Jones’s Diary is a very funny film that was in part thanks to Zellweger’s fantastic performance that even got her an Academy Award nomination for best actress in a leading role. About Time, a fan-favourite among romcom lovers, was written and directed by Richard Curtis. This romantic comedy stars Rachel McAdams, Domhnall Gleeson and Bill Nighy (not the science guy) and it follows a man named Tim (Gleeson) who at the age of 21 discovers that he comes from a family of time travellers. Knowing that he can change anything that happens in his life, Tim meets a girl named Mary (McAdams) and uses his powers to win her heart. About Time is one of the top British romantic comedies and it combines everything, from laughs to tears. Four Weddings and a Funeral, one of the best British romantic comedies of all time was written by Richard Curtis and directed by Mike Newell. This romcom stars Hugh Grant (spoiler alert, he’s not over yet) and Andie MacDowell surrounded by a cast of other talented actors and actresses such as James Fleet, John Hannah and Kristin Scott Thomas. This romantic comedy follows an irresponsible bachelor (Grant) who at the course of four weddings and a funeral thinks he might have discovered love after all. Despite it being a romcom, Four Weddings and a Funeral was nominated for two Academy Awards, including Best Picture and Best Screenplay. Finally, this romantic comedy features some hilarious scenes including one with Rowan Atkinson who is portraying a minister. Love Actually is definitely one of the best British romantic comedies of all time and we have to admit it was a close second (maybe even a tie) with our number one choice. This romantic comedy, again written and directed by Richard Curtis, is also a go-to Christmas movie and it boasts one of the best a-listers casts of all time. Some of this Christmas romcom stars are Hugh Grant, Emma Thompson, Liam Neeson, Keira Knightley and Colin Firth (to name a few). This top romantic comedy follows 8 couples and examines how they are dealing with their love lives. Finally, for those who always wished for a sequel we have some good news. The cast of this romantic comedy returned and filmed a 15-minute special sequel for Red Nose Day. -You guessed it folks!
Unsurprisingly our number one pick for the best British romantic comedies of all time is “Notting Hill”. This romantic comedy that established the British romcom genre was written by Richard Curtis and stars Hugh Grant and Julia Roberts. The film follows a simple bookstore owner (Grant) who has his life turned upside down when the most famous movie star in the world (Roberts) walks in his store. We can’t think of anyone who never dreamed of being Hugh Grant or Julia Roberts in Notting Hill. Furthermore, Notting Hill is one of the ultimate feel-good movies that is the guaranteed “potion” when someone has the blues. Finally, an interesting fact about this romantic comedy is that it is the highest-grossing British romcom worldwide, managing to gross $363 million on a $42 million budget.

Before someone says that Shaun of the Dead isn’t a romantic comedy, if you think about it, it kind of is. The first part of the Cornetto Trilogy follows a man who decides that it’s time to turn his life around by winning his ex-girlfriend back and fix his relationship with his mother. Oh, and there are a bit of zombies involved. What’s more romantic than trying to win your girlfriend back in the middle of a zombie apocalypse? Fun fact: Coldplay’s Chris Martin is portraying one of the Zombies in this movie.

Although Pride & Prejudice is a fantastic film it didn’t make our list because it is not a comedy per se. This romantic drama set in 1797, follows a stubborn young woman (Keira Knightley) who meets a rich and proud man (Matthew Macfadyen). Can this rich man fall in love with someone below his class?

Enjoyed this article? Why not take a look at The Top 5 French Action Movies?