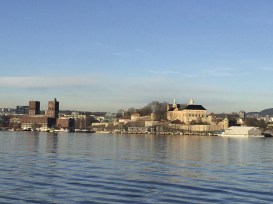 Oslo, also known as Tigerstaden (The Tiger City or City of Tigers), is the capital of Norway. With a population of almost 700,000 people, Oslo is the largest city of Norway and is situated on the southern coast of the country. According to old Nordic stories (Sagas), Oslo was founded in the 11th century AD, however, many people claim that it was founded long before that. When it comes to modern Oslo, the Norwegian capital is home to many green spaces and museums which include the Norwegian Maritime Museum and the Viking Ship Museum. Although Oslo has been featured in several Norwegian productions, it hasn’t been used as a filming location in many foreign films. In this article, we are taking a look at 5 movies filmed in Oslo, Norway. Find out which are the latest movies shot in Oslo below. It’s All About Love, one of the first foreign movies shot in Oslo (partially), is a 2003 drama that stars Joaquin Phoenix, Claire Danes and Sean Penn. The film is set in the near-future in which the world is about to end and tells the story of a couple who while in the process of getting a divorce they both realise that their love is something that they should keep fighting for. The movie filmed in several locations around the world including Copenhagen, New York, Venice and Oslo. Despite its intriguing premise, the film was a flop grossing only $6,140 in the US (2 theatres) and less than $1 million worldwide. Oslo, August 31st, is an award-winning drama directed by Joachim Trier and one of the several movies filmed in Oslo. The film follows a recovering drug addict named Anders who is given a day’s leave from rehab to interview for a job in Oslo. After leaving the interview, Anders spends the rest of the day catching up with old friends. Moreover, the film was entirely shot in Oslo and some of the locations include Henrik Isbens Gate, Frognerparken and Blå night club in Brenneriveien 9. Finally, the Norwegian film was nominated for a Un Certain Regard Award in the Cannes Film Festival. Headhunters, one of the many Norwegian movies filmed in Oslo, is a fantastic action thriller that was based on Jo Nesbø’s novel of the same name. The action-packed film was directed by the Norwegian director Morten Tyldum (The Imitation Game, Passengers) and stars Aksel Hennie, Synnøve Macody Lund and Nikolaj Coster-Waldau (yes, Jaime Lannister). The film follows Roger (Hennie), a talented headhunter who will stop at nothing to acquire an expensive painting owned by an ex-mercenary. The film was entirely shot in Norway and some of the Oslo locations include the Uranienborg neighbourhood in Frogner and Skøyen. Finally, it is important to mention that Headhunters is the highest grossing Norwegian film of all time. In Order of Disappearance, starring Stellan Skarsgård and Kristofer Hivju is a black-comedy/action film directed by Hans Petter Moland. The movie centres around Nils (Skarsgård), a snow plow driver who was recently named Citizen of the Year. After his son dies from what seems like a heroin overdose, unconvinced Nils take matters in his own hand and finds himself in the middle of a mafia war. The award-winning In Order of Disappearance was filmed in Oslo as well as Beitostølen. In addition, In Order of Disappearance is a highly entertaining film which is mostly attributed to its protagonists and witty black humour. In the silver screen adaptation of the Jo Nesbø best-selling crime fiction novel (The Snowman), Michael Fassbender plays detective Harry Hole, brilliant yet troubled detective, who is investigating the disappearance of a woman with the only clue being her scarf wrapped around a snowman. One of the latest movies filmed in Oslo, The Snowman was shot in several locations in and around the Norwegian capital. Some of these locations include the new business district as well as the Nordmarka forest in Oslo. The film was also shot in the police headquarters as well as in the Oslo City Hall. Finally, despite it having a great cast which consists of Fassbender, Rebecca Ferguson, Val Kilmer and J.K. Simmons the film was a disaster despite it having a great source material.

We decided to also include some other movies shot in Oslo that deserve a special mention.

Recently released Thelma, tells the story of a woman who discovers she has extraordinary powers.

Not to be confused with Thor: Ragnarok, this Norwegian adventure film follows a Sigurd, an archaeologist, who along with his team try to discover the meaning of some ancient runes. However, they accidentally awake a mythological monster.

Enjoyed this article? Why not take a look at our list of 5 movies filmed in Bangkok?