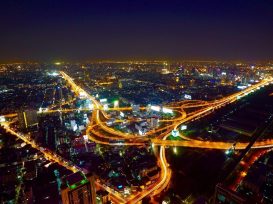 Bangkok, also known as “City of Angels” and the “Big Mango, is the largest city and the capital of Thailand. Bangkok is a vibrant yet sometimes chaotic city that is known for its lively street life and its ornate shrines. Furthermore, the Thai capital is also known for the Chao Phraya river, a boat-filled river that through its canals flows through almost the city. Famous landmarks in Bangkok include the Grand Palace, the Wat Phra Kaew Temple, the Wat Arun Temple and of course the Wat Pho Temple, known for its enormous reclining Buddha. When it comes to the silver screen, Bangkok has been used several times by many filmmakers as their canvas. In this article we are taking a look at 5 famous movies filmed in Bangkok, Thailand. Find out which are the latest movies shot in Bangkok below. In the 20th instalment of the James Bond franchise, 007 (Pierce Brosnan) trying to stop a media mogul’s plan of obtaining exclusive worldwide media coverage by starting a war between the UK and China (we didn’t say it was the best James Bond film). Despite it not being on the top of the Bond franchise, Tomorrow Never Dies features one of the best chase scenes in the 007 series that was filmed in Bangkok. Moreover, Tomorrow Never Dies was filmed in several countries including the UK, Germany and Thailand. Filming locations in Thailand include Tannery Row and Mahogany Wharf (motorbike chase scene) and the  Westin Banyan Tree Hotel, all in Bangkok. The Beach is one of the several famous movies filmed in Bangkok, directed by Danny Boyle (Slumdog Millionaire, Trainspotting) and starring Leonardo DiCaprio. This film follows a young man named Richard (DiCaprio) who while in Thailand discovers a strange map. Rumour has it that this mysterious map leads to a secret tropical haven, thus the intrigued young man sets out to find it. The Beach offers some great cinematography that is guaranteed to make people want to travel in Thailand. In addition, the film was entirely shot in Thailand (with the exception of one scene in the UK), in Ko Phi Phi Le (also known as Phi Phi island), as well as Bangkok. Finally, filming locations in Bangkok include the Phra Nakhon District and the Khao San road.

The second instalment of the Hangover trilogy finds the wolfpack in Thailand for Stu’s wedding, and this time the gang messed up big time. Just like the first Hangover movie, the team lost one of their friends (thank God it’s not Doug) on a “sick” night out in Bangkok. The comedy was mostly filmed in Bangkok in several locations across the city. Some of these locations include Chinatown, the Soi Cowboy street, and the State Tower Hotel as well as the Thonburi canals. Finally, an interesting fact about this movie is that Bill Clinton visited the set while he was in Bangkok and rumour has it that the former US President filmed a cameo, that however never made it to the big screen. Only God Forgives, one of the many famous movies filmed in Bangkok, Thailand (entirely), was written and directed by Nicolas Winding Refn and stars Ryan Gosling and Kristin Scott Thomas. The movie follows Julian (Gosling), a successful drug-smuggler operating in Bangkok who sees his life turned upside down when his mother pressures him to find and kill the people responsible for murdering his brother. Despite it having an interesting premise, Only God Forgives failed to impress both audiences and critics. However, it offers some great cinematography thanks to its filming locations. Some of the filming locations in Bangkok include the Watthana District (Nana Nuea) and the Khlong Toei District in Central Bangkok. All I See Is You, one of the latest movies shot in Bangkok, was directed by Marc Foster and stars Blake Lively and Jason Clarke. This drama/mystery film tells the story of a blind woman (Lively) and her husband (Clarke) and how their relationship changes when she regains her sight and uncovers some disturbing details about themselves. Furthermore, the film was shot in Thailand and Spain with several of the filming locations being in Bangkok. Finally, despite the appealing premise and a good cast, the film only grossed $217 thousand on a $30 million budget.

Several other movies have been filmed in Bangkok so we felt that they deserve a special mention. The second James Bond film on our list is one of the many movies filmed in Bangkok, Thailand. This 007 movies was entirely filmed in Hong Kong and Thailand. Locations in Bangkok include the floating market, the Lumpini Stadium, the Wat Nang Nong temple and the Royal Turf Club.

Just like The Deer Hunter, Good Morning Vietnam was set in Vietnam. However, due to the political situation between the US and Vietnam, the film was entirely shot in Thailand with a few scenes being filmed in Bangkok.

The third instalment in the Rambo franchise is one of the many movies filmed in Bangkok, as ot filmed some of its scenes in Bangkok as well as Chiang Mai.

Several scenes of the Bridget Jone’s Diary sequel were filmed in Bangkok as well as in Phuket.

A Prayer Before Dawn is a recently released film based on the true story of an English boxer who was incarcerated in one of Thailand’s most dangerous prisons.

Enjoyed this article? Why not take a look at our list of 5 movies filmed in Bali?