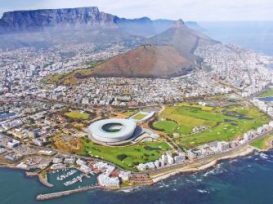 Cape Town is a beautiful city located on the southwest coast of South Africa. This South African city is mostly known worldwide for the Table Mountain, a flat-topped mountain that overlooks the city’s 450,000 residents. Cape town is undoubtedly one of the most beautiful cities in the world and it boasts a good climate, a magnificent natural setting as well as a well-developed infrastructure. When it comes to the film industry, this vibrant South African city has been chosen by dozens of filmmakers as a filming location. In this article we are taking a look at 10 famous movies filmed in Cape Town, South Africa. Find out which are the latest movies shot in Cape Town below. Lord of War, one of the several famous movies filmed in Cape Town, was written and directed by Andrew Niccol and stars Nicolas Cage, Ethan Hawke and Jared Leto. This crime film tells the story of an international arms dealer (Cage) as he is being chased by an Interpol Agent and starts questioning the morality of his work. Even though the film doesn’t take place in South Africa, Cape Town was used as a filming location for the Middle East, Bolivia, Afghanistan and Sierra Leone. Lord of War is a fantastic film and features one of Nicolas Cage’s best performances. The Fall, one of the many movies shot in Cape Town, is an adventure film directed by Tarsem Singh. This unusual yet great film is set in a 1920s LA hospital and follows an injured girl named Alexandria (Catinca Untaru) who befriends another patient named Roy(Lee Pace), a paralysed stuntman. Roy begins to tell Alexandria a captivating story about mythical heroes and exotic landscapes who are on a journey to kill a corrupt governor. This must-see unique adventure film known for its mesmerising cinematography was shot in several locations across the world, including India, Argentina, Indonesia, France, and South Africa to name a few. All of the hospital scenes in the film were shot in Cape Town in the Valkenberg Hospital. Blood Diamond, one of the many famous movies filmed in Cape Town, South Africa, was directed by Edward Zwick and stars Leonardo DiCaprio and Djimon Hounsou. As the tile suggests, the film tells a story about the brutality and violence that surround the African blood diamond industry. Although the film is mostly set in Mozambique, a few scenes were filmed in Cape Town, including the V&A Waterfront (Victoria & Albert). Finally, the Blood Diamond was nominated for five Academy Awards, including Best Performance by an Actor in a Leading and Supporting Role. Rendition, a 2007 thriller starring Jake Gyllenhaal, Reese Witherspoon and Meryl Streep tells the story of a CIA analyst (Gyllenhaal) who after being a witness to some unorthodox interrogation techniques, he starts to question his own assignment. The film was shot in several countries around the world including Morocco and South Africa. Several of the film’s scenes were shot in Cape Town including shots at the Cape Town International Airport. Finally, despite the intriguing premise and a stellar cast, the film only grossed $27 million on a $25 million budget. One of the few movies entirely shot in Cape Town, The Last House on the Left is horror/thriller film isa remake of the 1972 film of the same tile. This disturbing movie was directed by the Greek director Dennis Iliadis and is not for the faint-hearted due to its gore and excess in psychological and physical violence. The 2009 remake was filmed entirely in South Africa, in Cape Town as well as the Helderberg Nature Preserve. One of the most famous movies filmed in Cape Town, Invictus, tells the story of Nelson Mandela’s efforts to unite an apartheid-torn South Africa by enlisting the Springboks (South African national rugby team) to win the 95′ World Cup. This twice Academy Award nominated film was directed by Clint Eastwood and stars Morgan Freeman as Nelson Mandela as well as Matt Damon as Francois Pienaar (captain of the team). The film was shot in several locations across Cape Town as well as Robben Island, an island located 7 kilometres off the coast of Cape Town. Safe House, one of the many movies filmed in Cape Town, is an action thriller directed by Daniel Espinosa starring stars Denzel Washington and Ryan Reynolds. The film follows a rookie CIA agent named Matt (Reynolds) who is tasked to man a rogue CIA agent in a safe house. However, when things go awry, Matt and the rogue agent finds themselves on the run. Furthermore, Safe House was mostly filmed in Cape Town. Despite many of the filming taking place indoors, some of the outside locations include the Western Boulevard ( car chase scene), Adderley street, Lagoon beach as well as the Cape Town Stadium. Finally, an interesting fact about this movie shot in Cape Town is that Ryan Reynolds revealed that Cape Town is his most favourite for filming(Cape Argus). Dredd, another movie shot in Cape Town, is a remake of the 1995 Judge Dredd starring Sylvester Stallone. The 2012 remake was directed by Pete Travis and stars Karl Urban as Judge Dredd. The sci-fi film takes place in the future in which policemen have the ability to act as a judge, a jury and an executioner. Except the opening scenes, the film was mostly shot in South Africa, in Johannesburg and Cape Town including the Cape Town Film Studios. Despite the overall good reviews and a stellar performance by Urban, the film grossed only $41 million on a $35 million budget. In The Brothers Grimsby, one of the latest movies filmed in Cape Town, a top MI6 agent (played by Mark Strong) is forced to team up with his cockney hooligan brother named Nobby (played by Sacha Baron Cohen) in order to save the world. Although part of the film is set in Chile, where the World Cup is supposedly taking place, it was actually filmed in several locations across Cape Town, including the Cape Town Stadium. Finally, even though the film is not the best work of Cohen, it still provides some good scenes as well as a dozen good shots of Cape Town. In what is believed to be the final Resident Evil movie released (it was time), Alice is back in The Hive in Racoon City, right were it all began. Now humanity’s last chance is fighting for the few remaining survivors of the apocalypse. Moreover, even though the film failed to live up to its fans expectations it offers some amazing shots mostly thanks to South Africa. The movie filmed for two months in Cape Town and Hartbeespoort Dam and as many people noticed Racoon City is actually Cape Town and Table Mountain is featured as the backdrop for most of the movie.

We decided to also include a special mention for either upcoming movies shot in Cape Town or movies that were only shot in the Cape Town Film Studios. The film adaptation of the Dark Tower series starring Idris Elba and Matthew McConaughey was partially filmed in the Cape Town Film Studios.

The Lara Croft reboot starring Alicia Vikander as the main character is mostly shot in Cape Town including shot on Table Mountain, Epping and the Film Studios.

Enjoyed this article? Why not take a look at 5 Famous Movies Filmed in Bali, Indonesia?