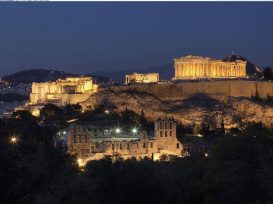 Athens, the cradle of democracy, is the capital of Greece. Mostly known for the Acropolis, its historical landmarks as well as souvlaki and tzatziki (anyone who has been to Athens knows what we are talking about), Athens attracts hundreds of thousands of visitors every year. The city of Socrates, Aristotle and Plato is an underrated city that has negatively been in the spotlight due to the Greek recession of the last few years. However, it still remains a must-see city with its picturesque and beautiful little streets in Plaka, Thiseio and Monastiraki. There are many places someone must visit when in Athens, from the Parthenon and the Acropolis Museum to the ancient Agora and the temple of Poseidon in Sounio. In this article we are exploring Athens by taking a look at 5 movies filmed in Athens. So grab a koulouri and take a stroll with us to explore the following movies shot in Athens. The Burglars is a 1971 crime-thriller written and directed by Henri Verneuil. One of the many movies filmed in Athens, The Burglars was shot in three locations in Greece, including Piraeus, Corfu and of course the capital. The film is set in 1970 and it follows a group of professional thieves who are planning the heist of an emerald from a gem collector’s house in Athens. Furthermore, the film stars Jean-Paul Belmondo, Omar Sharif and Dyan Cannon, and cost 15 million francs to be made (around $3 million in 1971). The Burglars is a great film for those who want to see what Athens looked like in the seventies. Tempest, another movie filmed in Athens, is a dramedy starring John Cassavetes, Gena Rowlands and Susan Sarandon. The movie follows an architect (Cassavetes) who is going through a mid-life crisis and decides to leave his job and his marriage in order to relocate in a small Greek island with his teenage daughter. The movie was shot in several locations across Athens and was nominated for two Golden Globes. However, despite the critics’ overall positive reviews, the movie was a flop. Ruby Cairo, a not very well-known thriller, starring Liam Neeson, Andie MacDowell and Viggo Mortensen, was actually partially filmed in Athens. This mystery thriller follows a widow (MacDowell) who is investigating her husband’s (who mysteriously died in a plane crash) financial dealings who she now thinks came from illegal activities. To her surprise, her husband’s money are scattered around the globe, and now with the help of a stranger (Neeson) is trying to track it. Ruby Cairo features several scenes in Athens, including actual shots of the Parthenon. The Girl On the Bridge is a fantastic film, directed by Patrice Leconte, starring Vanessa Paradis, Daniel Auteuil and Frédéric Pfluger. This French film follows a girl (Paradis) who one night decides to drown her sorrows in the Seine, only to suddenly be stopped by an interesting man named Gabor. The two of them, having a platonic relationship, decide to travel the Mediterranean. The Girl On the Bridge is one of the many movies filmed in Athens (partially), with several of its scenes shot in the city of Democracy. An interesting fact about the film is that it was nominated for a Golden Globe in 2000, for the best Foreign Language Film. The Two Faces of January, one of the many movies filmed in Athens, is a thriller set in 1962, starring Viggo Mortensen, Kirsten Dunst and Oscar Isaac and directed by Hossein Amini. This film follows a glamorous couple, a con-man (Mortensen) and his wife (Dunst), who meet a Greek-speaking American (Isaac) who is also a part-time con-man for tourists. After getting caught up in the murder of a detective, the three of them flee Athens. The Two Faces of January was filmed in several locations across, including Plaka and Monastiraki as well as actual shots of the Acropolis and the Parthenon. Finally, this period thriller managed to gross $13.5 million worldwide, with only $500 thousand of that in the US. Jason Bourne is perhaps the most famous movie filmed in Athens. Well, almost. Even though the movie was originally set to film in Athens, and even started it, due to some problems with the authorities production moved to Spain. Thus, all the scenes in the movies that portray Athens were actually shot in Tenerife, Spain.

Who knew that a Chuck Norris movie was shot in Athens? This action movie starring Chuck Norris filmed a scene in the Elliniko airport, the old airport of Athens.

Enjoyed this article? Why not take a look at the 5 Movies Shot in Kyoto, Japan?