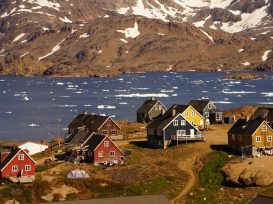 Many people believe that Greenland, a massive island in the north Atlantic ocean that is an autonomous Danish territory, is uninhabited. However, as a matter of fact, Greenland has a population of over 60,000 residents which translates translates to 0.08 people per square mile (we didn’t say it was densely populated). Most of Greenland’s surface is covered with ice and most of its population lives on the southwest coast. Greenland is a magnificent place that thankfully haven’t been spoiled by mankind (at least not yet). Thanks to its position that is above the Arctic Circle, Greenland is home to some spectacular natural phenomena such as the Northern Lights and the summer midnight sun. In this article we are exploring 5 movies filmed in Greenland. Find out which is the latest movie shot in Greenland below. What many people don’t know is that Clint Eastwood has portrayed a fighter pilot. In the action movie Firefox, released in 1982, Clint Eastwood portrays a pilot who is sent on a mission to the Soviet Union to steal a Russian jet prototype called “Firefox”. The movie was filmed in several places across the US and Austria, but it also features scenes in the Thule Air Base in Qaanaaq, Greenland. This might not be the best Clint Eastwood movie (also directed it) but we are excited since it’s one of the few movies filmed in Greenland. Eight Below, one of the few movies filmed in Greenland, is a family movie starring the late Paul Walker and Jason Biggs and Bruce Greenwood. The movie follows two explorers in the Antarctic who are forced to leave their sled dogs behind in order to survive. However, one of the two explorers (Walker) is trying to find sponsors to organize a mission to get his dogs back. Although the movie is set in Antarctica, most of it was filmed in Canada with 6 weeks of shooting in Greenland and a few in Svalbard, Norway. Rise of the Silver Surfer is the sequel to the 2005 Fantastic Four movie, starring Jessica Alba,  Ioan Gruffudd (extra points for those who pronounce it correctly) and Chris Evans. Although the movie is much better than the newest reboot of the Fantastic Four franchise it failed to keep the then Fantastic Four franchise alive. Moreover, an element that really annoyed fans worldwide was how the movie pictured Galactus, a cosmic entity that devours planets to live, who in the movie was pictured as a big cloud. Rise of the Silver Surfer was partially filmed in Greenland, on the Russell Glacier, were there are several shots of the Silver Surfer. The partially-shot in Greenland superhero movie grossed a disappointing $289 million worldwide on a $130 million budget (still much better than the $168 million the newest movie grossed). Inuk, another movie filmed in Greenland (entirely), was the official entry of Greenland for the Best Foreign Language film at the 2013 Academy Awards. The film was directed by Mike Magidson and follows a boy in Northern Greenland named Inuk, who after losing his father, rediscovers the way of his people. Inuk is a great film for someone who wants to see what Greenland looks like as it features scenes in Nuuk (the capital) as well as Uummannaq in Kitaa, Greenland. Journey to Greenland is a French comedy that was written and directed by Sébastien Betbeder. The movie follows two friends who are coincidently both named Thomas and are both struggling actors who decide to leave Paris and visit Nathan, Thoma’s dad. Thoma’s father lives in one of the most remote parts of Greenland called Kullorsuaq. The two friends will discover local traditions and explore the great outdoors. Journey to Greenland is one of the few movies filmed in Greenland, and it features some fantastic locations all over Kullorsuaq. Finally, this movie shot in Greenland is available on Netflix. The Secret Life of Walter MItty is an underrated movie, directed by Ben Stiller also starring himself, Kristen Wiig and Jon Daly. The movie follows Water (Stiller), a man who for 16 years works on the same desk job for a travel magazine but always day dreams of great adventures. After his and his coworkers’ jobs are threatened, Walter embarks on an extraordinary global adventure to save their jobs. Although part of the movie is set in Nuuk, Greenland, it was actually filmed in Iceland. Check out this great post on what the movie got right about Greenland. Only a scene featuring the Kangerlussuaq was actually filmed in Greenland. Nonetheless, The Secret Life of Walter Mitty is definitely a movie for those that are daydreamers and enjoy travelling.

Dr. Strangelove, perhaps the best Peter Sellers movie and one of the best comedies of all time features aerial photography from Thule Air Base in Northern Greenland.

Tarratta Nunaanni is an upcoming Greenlandic movie that is also the first fantasy film in the country’s cinematic history. Take a look at the trailer here.

If you want to learn more about filming in Greenland check out FILM.GL.

Enjoyed this article? Why not take a look at 5 Movies Shot In Ha Long Bay, Vietnam?