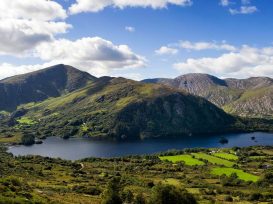 County Cork is the largest county in the Republic Of Ireland with a total area of 7,500 square kilometers. It’s capital, Cork, is the third largest city in Ireland and is home to the St. Fin Barre’s Cathedral, a beautiful neo-Gothic structure. County Cork is known for its beautiful coastline as well as its rivers, mountains and lakes. County Cork is also known for being the Titanic’s last port of call in Queenstown (now called Cobh), one of the largest natural harbours in the world. In this article, we are taking a look at 5 movies shot in County Cork. Find out which is the latest movie filmed in Cork below. Moby Dick is a 1956 movie based on Herman Melville’s novel which was published in 1851. This movie filmed in County Cork tells the story of Captain Ahab (played by Gregory Peck), a captain of a whaling hip who was obsessed with a huge whale named Moby Dick and would rest at nothing until he kills it. This film was partially shot in County Cork and more specifically at Youghal (the departure of the ship The Pequod). The Wind That Shakes The Barley is the quintessential Irish movie about the Irish War of Independence. The 2006 Palme d’Or winner, directed by Ken Loach and starring Cillian Murphy and Liam Cunningham follows two brothers who start a guerrilla war against the British forces during the Irish revolution. The Wind That Shakes The Barley is one of many movies shot in County Cork (entirely shot in County Cork) and features several locations including Ballyvorney, Bandon and Timoleague. Ondine, another movie entirely shot in County Cork, follows an Irish fisherman who finds a woman in his fishing net whom his intelligent daughter believes to be a Selkie (a mythological creature similar to a mermaid found in Irish, Scottish and Icelandic folklore). This movie filmed in Cork County was written and directed by Neil Jordan and was filmed in several locations including Puleen Harbour, Castletownbere (Beara) and also Bere island. The movie also stars Colin Farrell and Alicja Bachleda. Byzantium, a fantasy drama with horror elements, directed by Neil Jordan, was partially filmed in Beara, County Cork. This is a brilliant movie that follows two mysterious women who seek refuge in a decayed coastal resort. In addition, the residents of the coastal town find out about their secret, however, it comes with a price. Finally, the movie stars Saoirse Ronan, Gemma Arterton and Sam Riley. The Young Offenders is an Irish movie written and directed by Peter Foott that follows two teenage boys from Cork that steal two bicycles and go on a quest to find a missing bag of cocaine that is worth millions of Euros. This is one of the best movies shot in Cork County and it was entirely filmed in Cork City. The film has a 100% rating on Rotten Tomatoes out of 21 critics’ reviews. The new Star Wars movie called The Last Jedi is currently filming in several locations across the world including a scene at Brow Head (County Cork), the most southerly point of mainland Ireland.

The Lobster is a brilliant film by Greek director Yorgos Lanthimos, starring Collin Farrell and Rachel Weisz. This Oscar nominated movie was partially shot in County Cork at the Eccles Hotel in Glengariff Harbour.

Enjoyed this article? Why not take a look at The 5 Movies Shot In Adelaide, Australia?