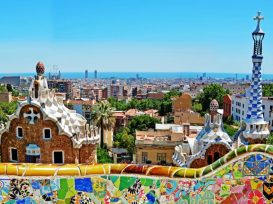 Catalonia, a region in northeastern Spain has been in the news for quite some time. Recently, however, when a referendum for its independence from Spain took place, Catalonia made international headlines when police police brutality stopped the Catalans from voting. Although Catalonia has been a sensitive matter for quite some time it never ceased to be a beautiful region with lively beaches, picturesque villages and of course the Pyrenees. Furthermore, the hot mediterranean climate of Barcelona and also Costa Brava deem Catalonia one of the best places to visit for holidays. Furthermore, Catalonia has been used multiple times as a director’s canvas with dozens of movies having filmed there. In this article, we are listing 5 movies shot in Catalonia (recently). Find out which is the latest movie filmed in Catalonia below. Perfume: The Story Of A Murderer, one of the many movies shot in Catalonia, was directed by Tom Tykwer and stars Ben Whishaw, Dustin Hoffman and Alan Rickman. The movie was based on Patrick Süskind’s novel of the same name and it follows Jean-Baptiste (Whishaw), a man who was born with an enhanced olfactory sense, who produces the world’s best aromas. However, in his pursuit to create the world’s ultimate scent, his work takes a dark turn. Finally, the movie was filmed in several locations across Catalonia, including Barcelona, Girona, Tortosa and Figueras. Savage Grace, one of the many movies shot in Catalonia, is a 2007 drama starring Julianne Moore and Eddie Redmayne. Based on true events, the movie follows Barbara Daly (Moore), a woman who became part of the American high society and who was found murdered in her flat in London in 1972. Savage Grace was filmed in several locations including, Barcelona, Girona and Sitges. Vicky Christina Barcelona is a movie filmed in Catalonia written and directed by Woody Allen. The movie features an a-lister cast with Scarlett Johansson, Javier Bardem , Penélope Cruz and Rebecca Hall. As the title suggest, this Woody Allen movie was mostly filmed in Barcelona and it two girlfriends on their summer holidays in Spain who fall in love with the same painter (Bardem). The film was shot in several location in Barcelona including Passeig de Gràcia and also the Santa Maria Del Mar Church. This movie shot in Catalonia is one of the best Woody Allen movies with fantastic performances from its cast. Finally, for her role as the painter’s ex-wife, Penélope Cruz also won an Academy Award for best supporting actress. A Monster Calls, another movie filmed in Catalonia, is a fantasy movie directed by J.A. Bayona , starring Lewis MacDougall, Sigourney Weaver and Felicity Jones. The movie follows a young boy (MacDougall) who seeks the help of a tree monster in order to help him manage with his mother’s terminal illness. Furthermore, this movie was filmed in several locations across Catalonia including Terrassa and Cabrils, as well as the Parc Audiovisual de Catalunya Studios in Barcelona. The Invisible Guest is one of the best Spanish thrillers (check out our top 5 Spanish thrillers) written and directed by Oriol Paulo. Furthermore, the movie follows a successful businessman who is accused of murder and only has 3 hours to come up with a defence. In addition, the Invisible Guest, one of the many movies shot in Catalonia was filmed in several locations across Barcelona and Girona.

The Bourne Identity, the first Jason Bourne movie features a scene in Barcelona in which the Treadstone agents are being contacted and were the Sagrada Familia is clearly visible.

Enjoyed this article? Why not take a look at the 5 movies shot in County Cork?