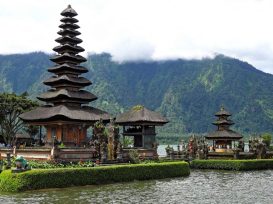 Bali is a beautiful Indonesian island that is famous for its volcanic mountains topped by rainforests, rice paddles as well as its crystal clear waters and its lively coral reefs. Bali is one of the most famous tourist destinations worldwide, with millions of tourists visiting this small Indonesian island every year. This small tropical paradise offers everything, from lively night entertainment, to Hindu temples for exploring and several yoga & meditation retreats. Thanks to its stunning locations, Bali couldn’t have gone unnoticed by several filmmakers who decided to use the tropical island for filming. In this article, we are exploring 5 movies filmed in Bali, Indonesia. Find out which is the latest film shot in Bali below. The Fall, one of the many movies filmed in Bali, is an adventure film directed by Tarsem Singh. This unusual yet great film is set in a 1920s LA hospital and follows an injured girl named Alexandria (Catinca Untaru) who befriends another patient named Roy(Lee Pace), a paralysed stuntman. Roy begins to tell Alexandria a captivating story about mythical heroes and exotic landscapes who are on a journey to kill a corrupt governor. This unique adventure film known for its mesmerising cinematography was shot in several locations across the world, including India, Argentina, Indonesia, France and South Africa to name a few. Filming locations in Bali include the Tegallalang rice terrace in Ubud and Gunung Kawi in Tampaksiring. Eat Pray Love, one of the most famous movies filmed in Bali, was based on the best-selling novel by Elizabeth Gilbert titled: “Eat, Pray, Love: One Woman’s Search for Everything Across Italy, India and Indonesia”. This romantic movie stars Julia Roberts and Javier Bardem and tells the story of a successful woman named Liz(Roberts), who after a nasty divorce decides to take a trip around the world and “discover herself”. As the book title suggests, one of Liz’s destinations is Indonesia (Bali). The film does justice to Bali’s breathtaking scenery as it uses many filming locations throughout Bali. Some of these locations include the town of Ubud, Gianyar Regency and the beautiful Padang Padang beach. Alex Cross, one of the latest movies filmed in Bali, is an action film based on the famous fictional character of the same name created by the author James Patterson. The movie stars Matthew Fox, Rachel Nichols, Jean Reno and Tyler Perry in the role of Alex Cross. The movie follows Alex Cross as he tries to bring down an assassin (Fox) who is targeting rich businessmen. Although most of the film was shot in the US, the movie shot several segments on the east coast of Karangasem in Bali. Finally, Alex Cross is the third time the fictional character appears on the big screen, with Morgan Freeman portraying the famous detective in Kiss the Girls and Along Came a Spider. Despite the long title that we are avoiding to use many times, this great feel-good movie was written and directed by Felix Herngren. The 100 Year-Old Man Who Climbed Out the Window and Disappeared tells the story of a man name Allan (played by Robert Gustafsson) who after a long and happy life ends up in a nursing home. However, on his 100th birthday Alan decides to escaper the nursing home by climbing out of a window and sets on a new adventure. In addition, the movie was shot in Sweden, Hungary, Croatia and also Bali. Although the movie is set in Bali and filming was meant to take place there, some people argue that filming actually took place in Thailand instead of Bali. However, we are not entirely sure if that’s the case. The Perfect Wave is a 2015 adventure film based on the life of Ian McCormack, an adventurer who in 1982 was stung by five deadly box jellyfish in Mauritius and survived. This adventure film stars Scott Eastwood as Ian McCormack and follows his life and the day that changed him forever. This joint South African, Indonesian and New Zealand production was filmed in several locations across the world including Mauritius, Bali and Cape Town.

We decided to also list some documentaries and movies hat were also shot in Bali, Indonesia. Baraka is a documentary that tracks the life human life and religion across the world.

Racing Extinction is a 2015 documentary directed by Louie Psihoyios that follows several activists who are trying to prevent a massive animal extinction. In addition, The documentary also follows Elon Musk.

Dead Squad is a horror movie that is in post-production and follows a group of people lost in the jungle. The film is entirely shot in Bali, Indonesia.

Enjoyed this article? Check out our list of 5 movies shot in Ha Long Bay, Vietnam.