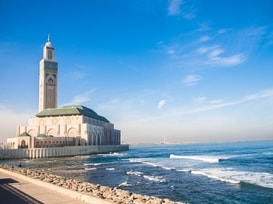 We’ll always have Paris. Perhaps the most iconic line of the 1942 masterpiece starring Ingrid Bergman and Humphrey Bogart. That’s one of the first things that comes to movie-lovers minds’ when they hear the world Casablanca. However, the Moroccan city is known for its rich history as it served and is still serving as a commercial hub between Europe and Africa. With a population of over 3.3 million people, Casablanca is the largest city in Morocco, six times larger than the capital, Rabat. Despite it being in the backdrop of many famous past films such as Casablanca and The Maltese Falcon, not many movies were actually filmed in Casablanca. In this article, we are taking a look at 5 famous movies filmed in Casablanca, Morocco. Find out which are the latest famous movies shot in Casablanca below. One of the first famous movies filmed in Casablanca, Spy Game is an action thriller directed by Tony Scott starring Robert Redford and Brad Pitt. The film follows a CIA operative (Redford) who is about to retire but discovers that his protege has been captured in China for government espionage. Although the film is not actually set in Morocco, the North-African country provided the filming locations for Vietnam and Beirut. More specifically, the Fint Oasis replaced Vietnam and all scenes taking place in Beirut were filmed in several locations across Casablanca. Finally, although Spy Game’s plot is a bit improbable, the casts’ performances make the film a must-watch spy-thriller. Syriana is a 2005 drama loosely based on Robert Baer’s novel “See No Evil: The True Story of a Ground Soldier in the CIA’s War on Terrorism”. The film directed by Stephen Gaghan stars Matt Damon, George Clooney, Amanda Peet and Jeffrey Wright and tells the story behind the oil industry in the Gulf. Just like most movies on our list, the film doesn’t take place in Morocco, however, Casablanca stood in as the replacement for Tehran and Beirut. Furthermore, for his role in Syriana, George Clooney won an Academy Award for Best Supporting Actor, his first and only Academy Award as an actor (also shared one with Ben Affleck and Grant Heslov for Best Motion Picture of the Year for Argo).

Body of Lies, another addition to spy movies shot in Casablanca, was directed by Ridley Scott and stars Leonardo DiCaprio, Russell Crow and Mark Strong. Roger Ferris (DiCaprio), a CIA operative, is hunting the leader of a terrorist organisation in Jordan and is caught between a web of lies from his supervisors and the Jordan Intelligence Service. Moreover, just like Spy Game, Body of Lies takes place in Jordan instead of Morocco , however, it was shot there since authorities in the UAE (production’s first choice for Jordan) didn’t give their permission to film in Dubai because of the film’s heavy political theme. The film shot in several locations in Morocco such as Rabat and Casablanca. A fun fact about this action thriller is that the Casablanca airport was disguised as the headquarters of the Jordan Intelligent Service. The latest instalment of the Mission Impossible franchise (until the next one) is one of the latest famous movies filmed in Casablanca. This time Ethan Hunt (played by Tom Cruise) is facing his toughest mission, to take down an organisation called The Syndicate, a rogue agency committed to dissolve the Impossible Mission Force. Furthermore, the action film was shot in several locations across Morocco, including Marrakech, Agadir, Rabat and of course Casablanca. Filming locations in Casablanca include the Old Medina and Derb Sultan districts as well as the Hassan II Mosque also known as the Grande Mosquée Hassan. Finally, the rest of the cast consists of Jeremy Renner, Rebecca Ferguson Simon Pegg and Ving Rhames, the only charachter after Tom Cruise to appear in all of the Mission: Impossible movies.

War Dogs, one of the most recent movies filmed in Casablanca, tells the semi-true story of David Packouz (played by Miles Teller) and Efraim Diveroli (played by Jonah Hill), two childhood friends who became arms dealers and won a multi-million dollar contract from the Pentagon to supply the US military with weapons. Although the film is fictionalised to a great extent, it does offer some insight to what really happened in 2007. Filming took place in several parts of Morocco including Casablanca, which stepped in as Jordan and Iraq. According to Jonah Hill, Morocco and especially Casablanca is one of the locations where he had the most fun filming.

We decided to also include some movies that were either briefly filmed in Casablanca or were set in Casablanca (not actually filmed there) and deserve a special mention. I think this is the beginning of a beautiful friendship. One of the best films ever made and three-times Academy Award winner, Casablanca, was entirely filmed in the US in Arizona and California (Warner Bros Studios).

The seven-times Oscar winner Patton is one of the many movies filmed in Morocco. Although the film was mostly filmed in Spain (for the North Africa scenes), filming also took place in the ancient city of Volubilis in Morocco as well as in Casablanca.

This 2006 movie that tells four intertwining stories in four different countries was partially filmed in Morocco. Although most of filming takes place in Ouarzazate, a few scenes were filmed in Casablanca.

A Hologram for the King, one of the many movies filmed in Casablanca, is based on the Dave Egers novel of the same name. Although the movie takes place in Saudi Arabia, the main filming location was Morocco in several cities including Casablanca.

Enjoyed this article? Why not take a look at our list of 10 famous movies filmed in Ha Long Bay, Vietnam?